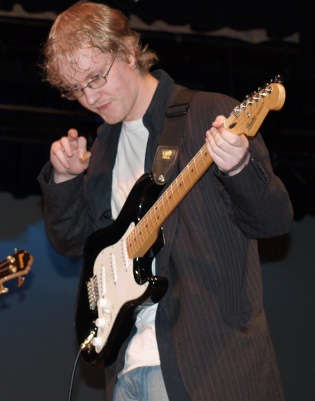 David McHenry‘s passion for music first began to bloom in high school, where he participated in multiple musical activities and broadened his instrumental expertise with viola, piano, and steel drums.  He decided on a serious pursuit of the guitar.  After attending Interlochen Arts Camp, where he had his first formal studies in jazz and classical performance, he began to study classical guitar with James Marron at Akron University, in addition to performing with several local rock groups.

He attended Baldwin-Wallace Conservatory of Music where he studied classical guitar with Dr. Loris Chobanian and jazz with Greg Banaszak.  He also studied with guitarist Tony Pulizzi and participated in master classes with many great artists.  Furthermore, he has performed in pits for the musicals Brooklyn at Playhouse Square and  The Breakup Notebook at The Beck Center for the Arts, and performed at the 2009 Akron Hip-Hop festival with Poetic Republic, opening for KRS-One.

Currently, David enjoys a lively and diverse career as a teacher and freelance guitarist and bassist, regularly performing in musical theater pits and with local rock, jazz, and hip-hop groups.